I am so excited to share this amazing party with you. One of my blog readers, Birdie of Bird Crafts, created this amazing party. She and her husband were celebrating their 6th wedding anniversary and she went all out!

An amazing amount of thought, time and effort went into this event. Birdie lives in the south of France (yes I said France) ans she had  planned to hold outdoors but as Mother Nature has a tendency to do she decided to do her own thing – instead of sunshine she brought a windy and gray day instead,

Birdie was flexible though and set up indoors instead.

Here is Birdie. I’ll let her tell you all about the party.
The hubs is not big on desserts and with the Indian theme, we didn’t want any cakes. Instead, we filled the table with Indian-style sweets – Fit for a Maharajah!! 🙂 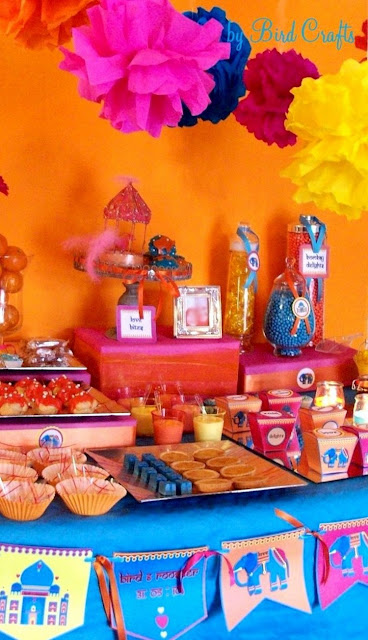 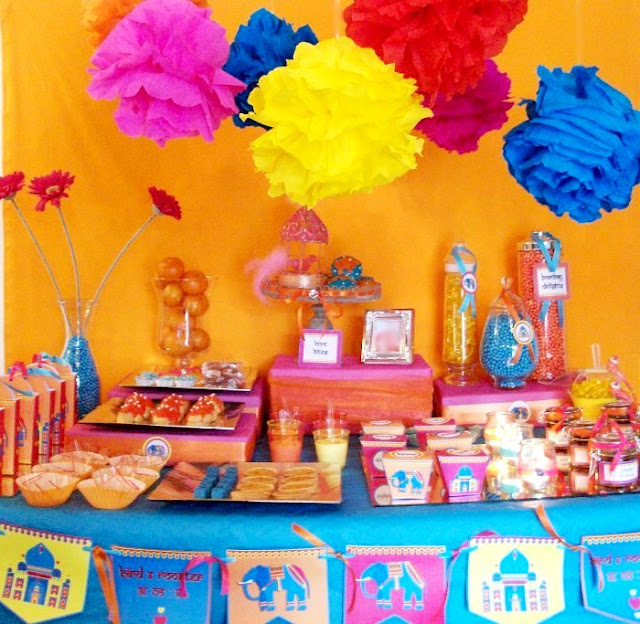 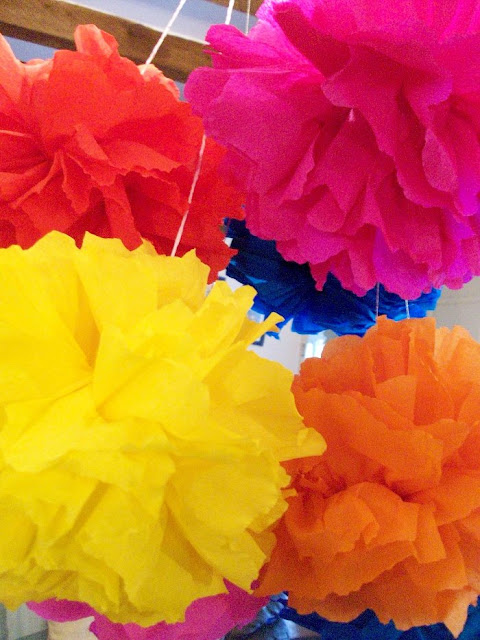 Some of the sweets I made myself, like the blue Indian “truffles” (I made them up..) and the gulab jamun, and shall share the recipes with you in due course. Others more elaborate sweets such as the oriental petit fours below, I bought from our local oriental shop. 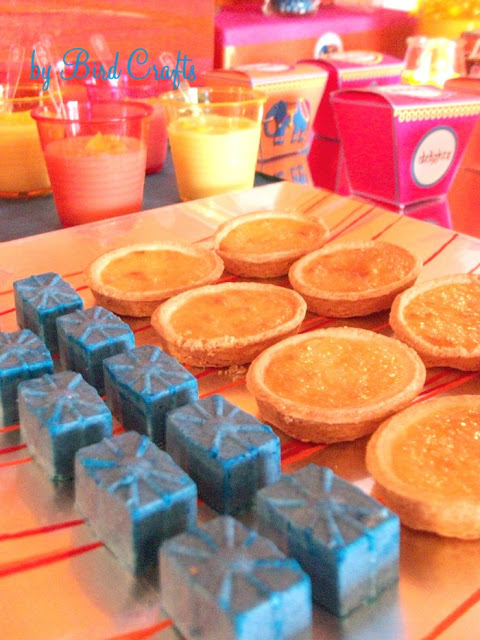 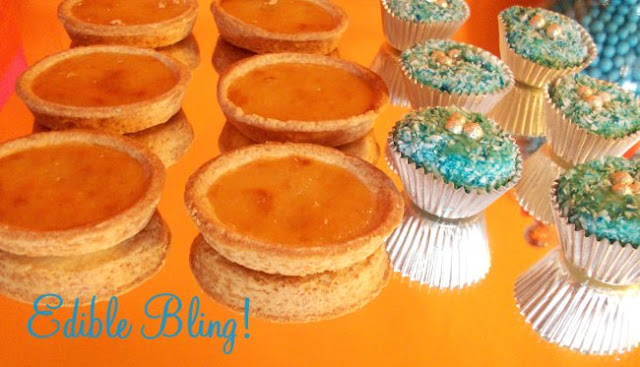 I also made mango Laassi, which is kinda of an Indian take on a milk-shake – I was very refreshing and quite thick, with real chunks of mangoes. I served them in little coloured cups I bought at a French version of the pound or dollar shop.
This orange “alien-looking” thing is called Jalebi and it’s an Indian sweet made by dropping swirls of batter into hot oil. It’s coloured with safforn but waaaay tooo complicated to make, so I bought ready-made. It’s very sugary, but stays crispy on the outside and very traditional in Indian dessert tables. 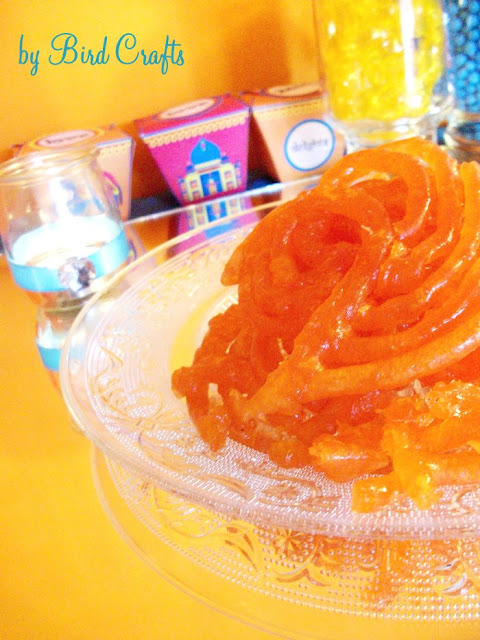 And because this was a family affair, we had conventional sweets (although the colours were quite Bollywood!) for the children. We also provided scoops so they could take some home in the little party boxes and favor bags I designed for the occasion. 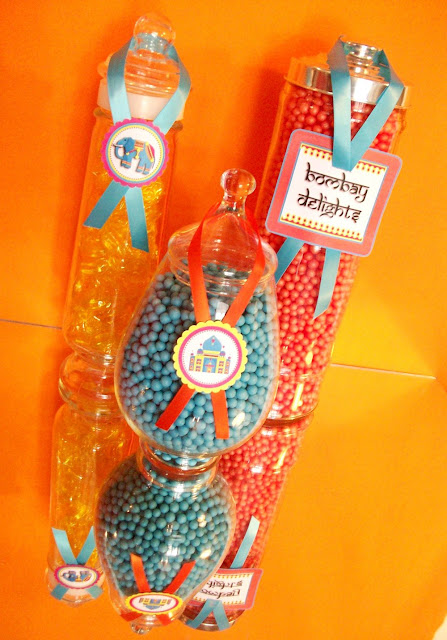 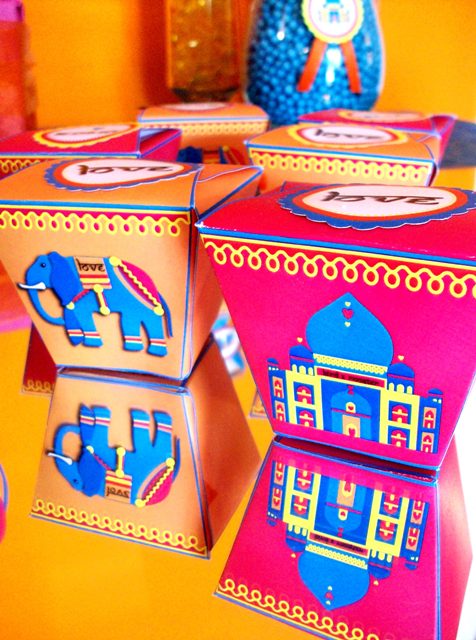 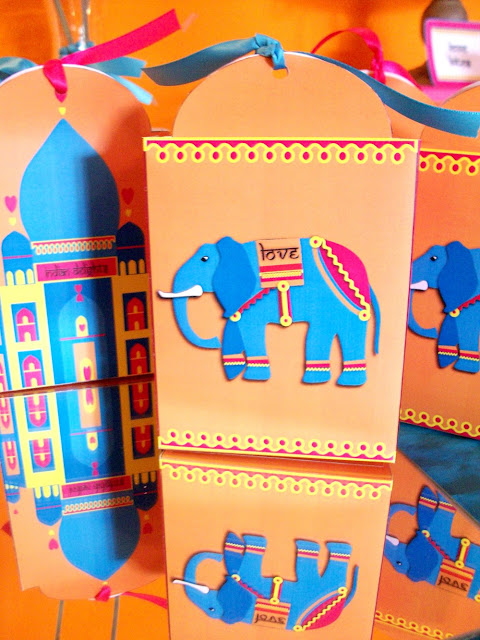 In addition to the party favor sweets, I also made some Spicy Mango chutney for the adults – We also had some on the day, so I liked the idea of the guest taking some home to enjoy the party a little longer! 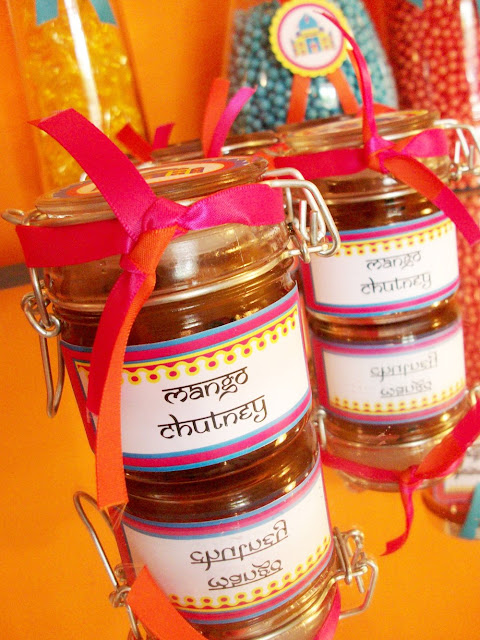 Because we were indoors, I had to display the party food and some of the party décor on small tables which I placed all around the room. By the entrance which leads to our courtyard, I placed a well wishes tree – I say tree…It was a couple of branches I sprayed silver. I then decorated the branches with some small paper flower similar to the coloured paper pom-poms above the desserts table. 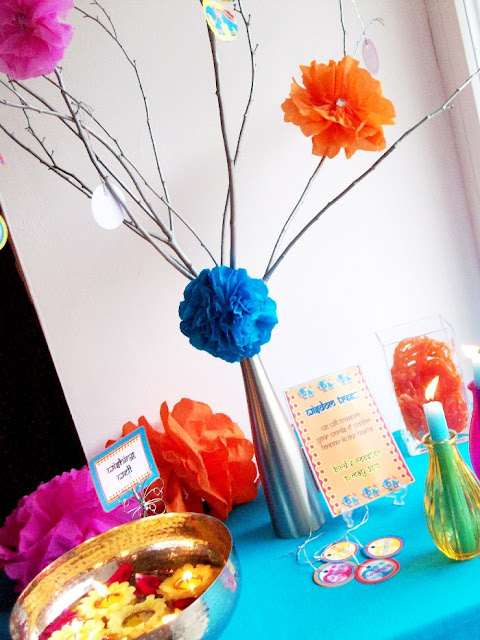 The “wishes” were small round cards in the same design of the party theme with a picture of myself and the hubs. Our guests were then encouraged to leave well wishes or “word of wisdom” hehe and hang them on the tree. This makes for nice memento of the day for us…
And more party favors (bangles, papier maché elephant and watercolours for the children, Indian tea personalised with the celebration date, scented candles and soap for the adults) were displayed in clear bags and small kitsch boxes I found at the oriental store for just €1 each! The boxes looked as though they were made for this occasion, in the party colours and even had a blue elephant on them! 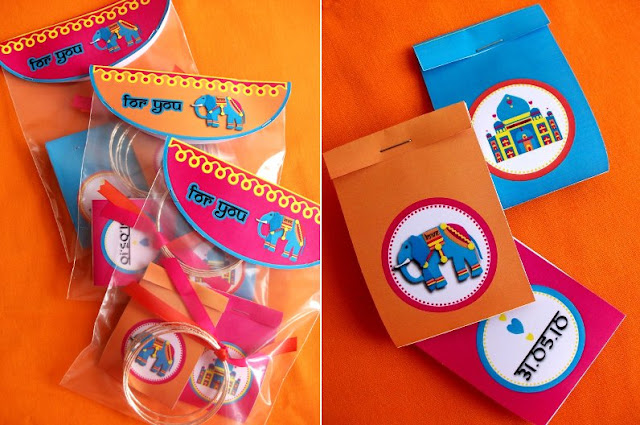 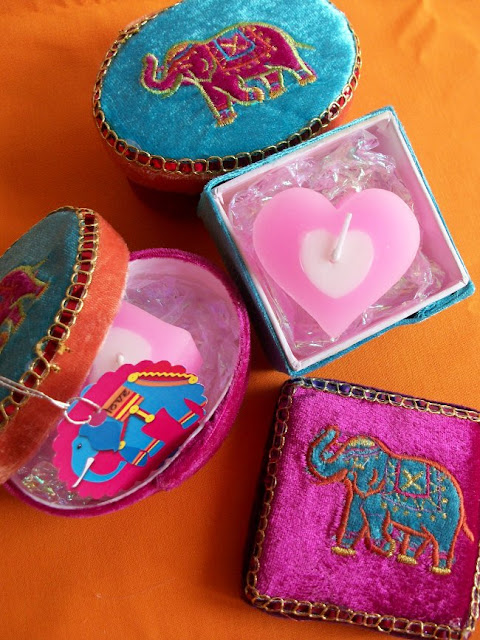 These party favors were displayed also by the entrance inside a small wheel-barrow decorated in the colours of the party. A small plaque read “Oriental Delights” to which I attached a silk blue ribbon. 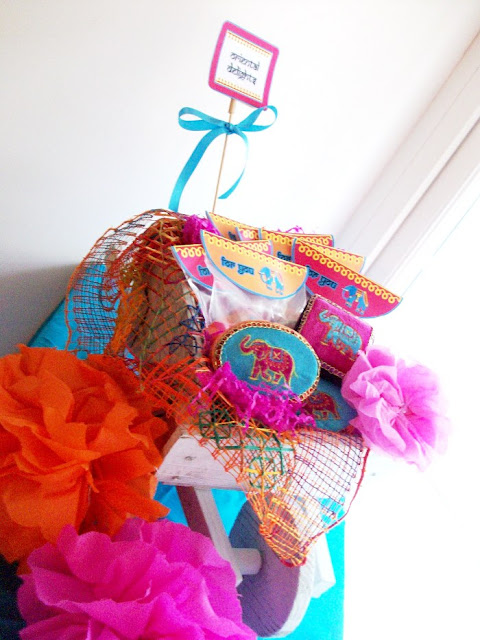 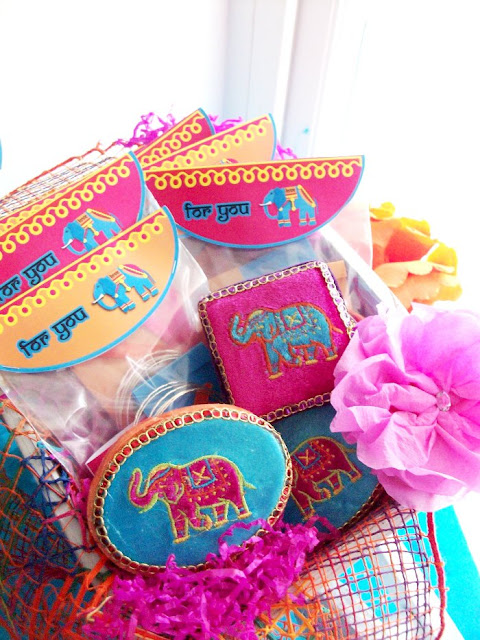 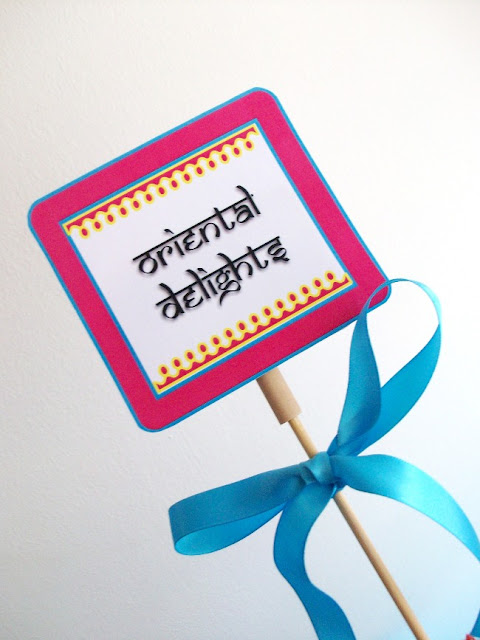 By the wishes tree, I place a “wishing well” with floating candles and rose petals – It looked like an offering to the “gods”….Very Indian! 🙂 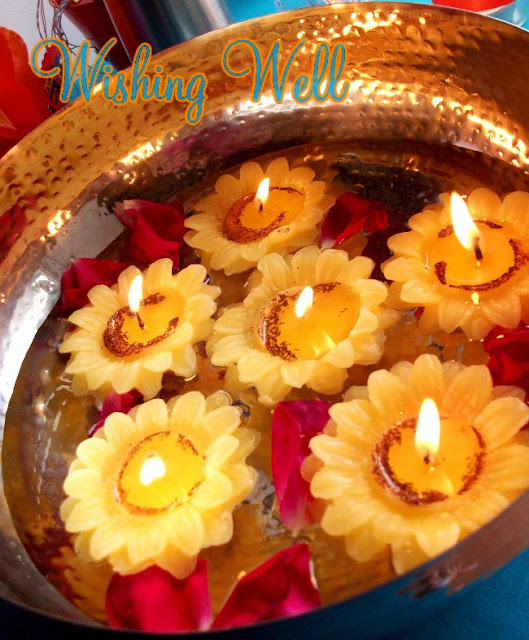 I also used some inexpensive metal photo holders to clip the food plaques. They tied in really well with the “bling” party décor! 🙂 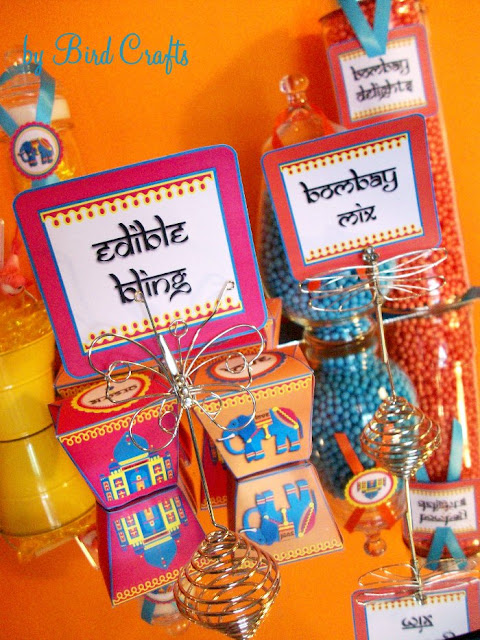 Oh, one thing I used that made all the difference, were pieces of mirrors (I had those at home, but you can get them cut to your specifications at a DIY shop) as trays and plates to hold the food on the table. This allowed more light to be reflected and looked really stunning with candles on them too – And off course I had to have birds everywhere!! hehe 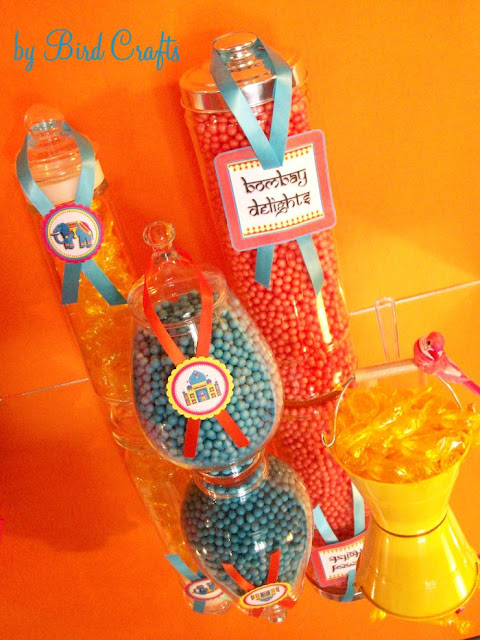 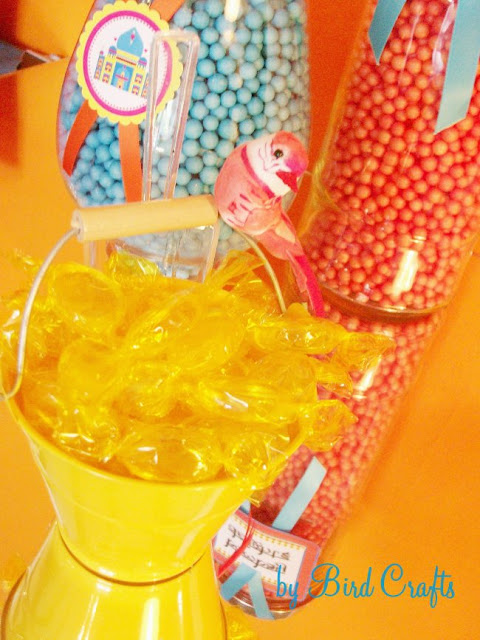 More candles completed the scene. In fact there were candles everywhere and they really helped to set the party mood and looked fab in the evening! 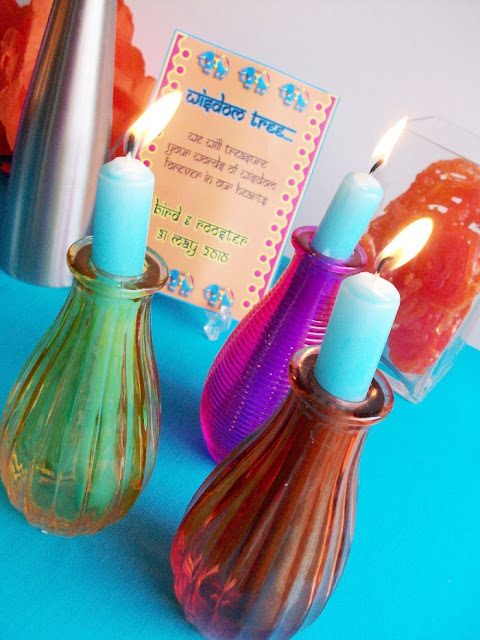 For the candles holders I used empty glass yoghurt pots, and glued a strip of coloured ribbon around with a big, fat rhinestone in the middle for extra Indian bling. 🙂
The flowers of choice were bright, pink gerberas in glass carafes filled with coloured sweets. But you could also use coloured sand, pebbles… 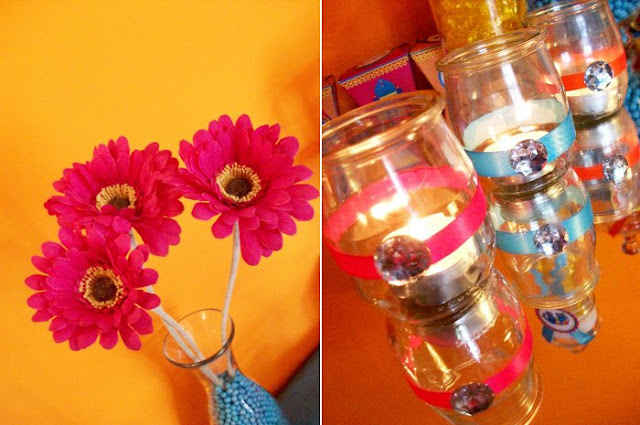 Oh, and to complete the party scene I also designed a blue elephant cut-out that I displayed around the tables – It looked so cool and was a talking point with children and adults alike! 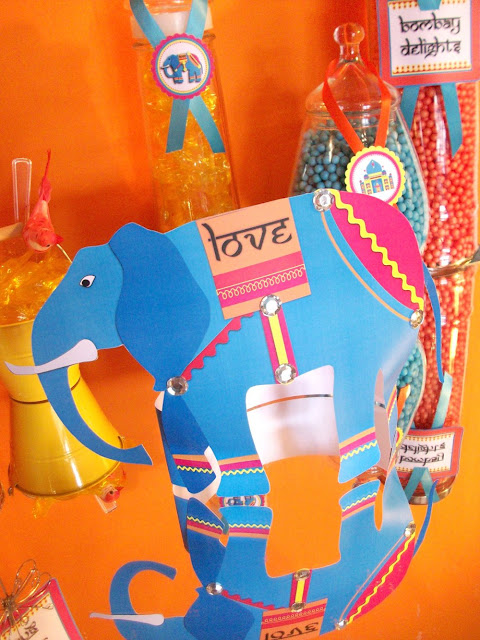 That’s all for today folks, hope you’ve enjoyed the tour hehehe.
The complete Bollywood Bling Party Collection is now available at my Etsy shop!
Wasn’t that amazing!! Be sure and visit Birdie over at her blog for more info and recipes. 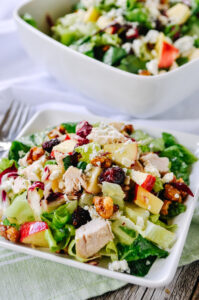 December 14, 2019
This Winter Salad is packed full of flavor and texture...
Read More 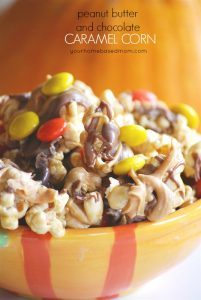 October 26, 2009
Looking for something new and yummy to fill those Trick...
Read More 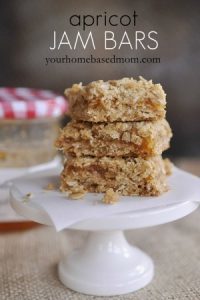 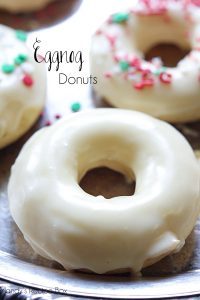 November 8, 2015
Eggnog Donuts are so easy to make and every eggnog...
Read More
Load More